A pair of star cross’d lovers take their life. 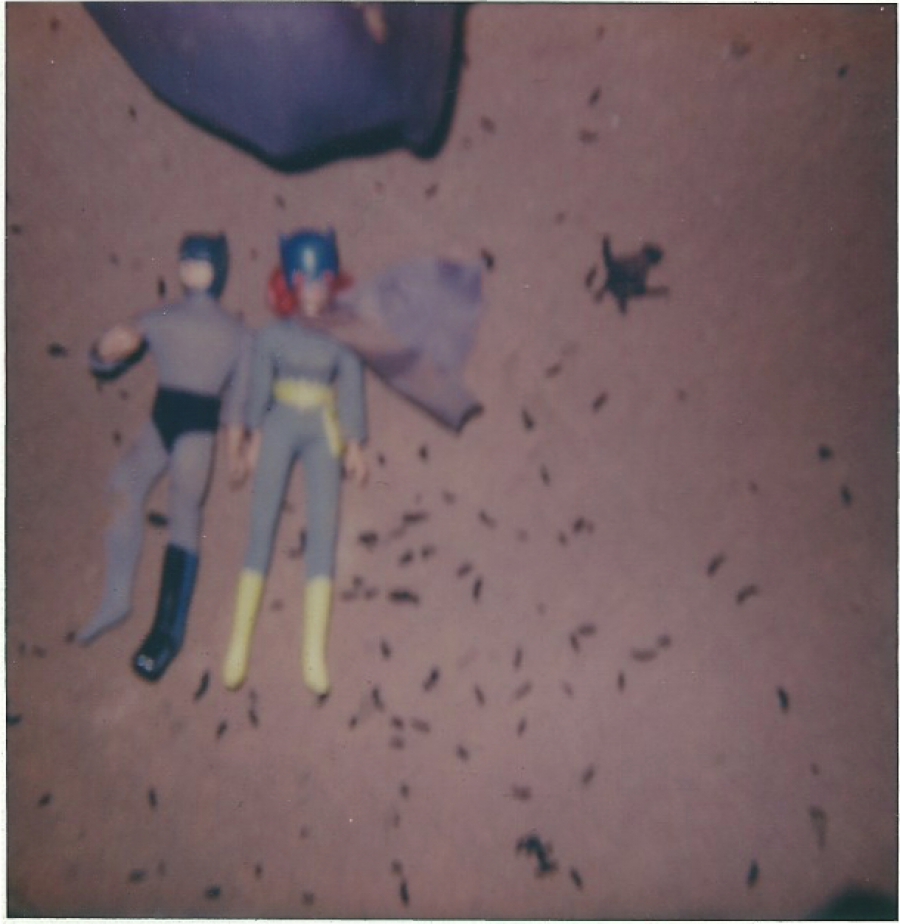 Polaroid with dolls, dead juvenile brown bat and bat droppings, 2016 Lance Rautzhan
A selection from a series of polaroids and paintings "We are Definitely Heroes" that calls into question our self-obsessed nature through the lens of the fictional superhero.  An open letter as statement...


My deepest apologies for any possible offense put upon your character by my aesthetic and intellectual interests.  I assure all of you, it is for good cause. Us humans are in trouble…again.  You see, we realized some time ago that anyone can be a hero in a personally created and curated universe.  Problem is, in creating our own mythos we are collectively replacing the self with the selfie.  We are manufacturing our hero-selves and so our true-selves become our secret identities.  I’m sure you can relate.  Vanity is on the rise on our side of the fence too. I am certain you all have experienced a bout with narcissistic tendencies, I mean come on, you are superheroes.  So it seems our problems are comically similar.  Thing is, you’ve been at this a lot longer than us.  So, as a self-appointed representative of the wildly interconnected but misdirected regular people I have called upon you, our heroes, to shed some light on the current human situation.  You may be our only hope.


P.S.  That goes double for you, villain!

Lance Rautzhan (born. 1974 in Pottsville, PA) is a multidisciplinary artist whose primary practice is painting.  He studied Social Theory and Philosophy at Indiana University of Pennsylvania. He moved to Long Island City, Queens in 1997 to study acting under Catherine Russell and make small works on paper.  In 1999, Rautzhan took a large studio in Baltimore, MD where he would go on to cultivate his body of work and exhibit heavily for 6 years.  After securing gallery representation in Baltimore, Rautzhan moved his studio to Bushwick, Brooklyn in 2006.  He would continue to work in Brooklyn until conceding to gentrification in 2014.  Rautzhan’s work has been exhibited (Baltimore - Gallery 211, Subbasement, SchiavoneEdward, New York - Freight & Volume, Arts & Leisure, Present Company, Eastern District, Provincetown - DNA Gallery, and with Freight & Volume at Pulse Miami 2010 and 2012), collected and published internationally. In 2013, he was chosen for and completed a residency with DNA Gallery in Provincetown. His aesthetic influences include 70's animation, avant-garde film, and Keith Richards.  He values slow burning substance as a hallmark of intelligence in art.  Currently, he works in a large barn in the Appalachian Mountains of rural Eastern Pennsylvania.