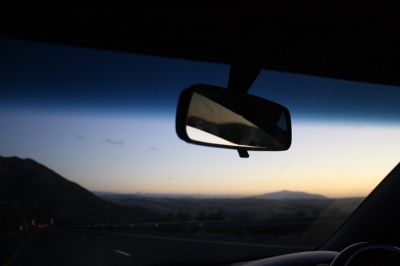 Photograph by Dave Mann
I’ve never been a confident driver. This is not to say that I’m an awful driver – I do fairly well on the roads and have yet to have an accident with another vehicle – but I am quite anxious behind the wheel.

Like all drivers, I despise traffic. It’s not so much the bit about sitting in long, smoky lines of early morning commute, I just hate the formality of it all. Stop. Start. Hoot. Switch lanes. Repeat. There’s nothing terribly stimulating about it. And because I am an anxious driver, I’m not the type who can zone out to an audio book or check emails or gaze out the window when in traffic. No, I can only sit – one foot on the clutch, one on the brakes, both hands fixed on the steering wheel as I wait to inch further along the assembly line. Outside of traffic I do love to drive, though. In my 25 years of life I’ve been lucky enough to go on many long trips by car and no drive has ever been the same.

My earliest discernible memory of driving would be in the December of 1997. I was five and my mother and I were making the annual trip up to Johannesburg in a small, but powerful Citi Golf to visit family. The drive is a long and strenuous one to make in one go, but my mother never once let on how tired she was and later, when we began to run dangerously low on petrol, how scared she was. Each time a truck let us overtake them it was my job to turn the hazards on and off in thanks. I committed myself wholeheartedly to this unspoken law of the road and when another car overtook us without flicking their hazards on and off I shook my fist at them, furiously. Safely in Joburg with the rest of the family, my cousins told me how they flew up in an aeroplane and how a large storm nearly rattled the entire thing out of the sky. Later, as my mom put me to bed, I told her that I thought we should always drive up to Joburg in a car instead of flying. It’s safer for all of us, I said.

Many years later and I’m making this trip all by myself. Less exciting, now, but enjoyable nonetheless. I find myself imitating my mother on these drives – pushing through the fatigue and the back pain, keeping a trained eye on both the road and the time, and always remembering to blink my hazards on and off when overtaking a truck. It is these small and simple routines of the road that make long drives so appealing to me.

Because when you’re driving, there’s not much else to do but drive. There are speed limits and potholes and other drivers to be considerate of, yes, but your mind – that incessantly racing and worrisome thing that never seems to switch off – is forced to slow itself down and simply unfold as everything rushes past it. No anxieties, no cellphones, no traffic, no conversation, just driving.

I have many good drives like this. At 18, when I had been declared a legal driver, my friends and I would pile into a single car and head out to a house two hours outside of Cape Town which was owned by a friend’s uncle. The three of us would fill up the car with food, booze and good music and race along with the kinds of stupid smiles on our faces that 18-year-olds wear so well.

Later, when I lived and studied in Grahamstown, I would make the annual trip from Cape Town to the Eastern Cape along the Garden Route with my good friend, Kate. We’d agree to share the driving in two hour stretches, but Kate would always fall asleep, leaving me in the driver’s seat for most of the drive. I didn’t mind. Those quiet drives through the Eastern Cape became something I looked forward to most.

Then, of course, those who have driven the quiet, flat roads that wind themselves throughout the hills of the Sabie Valley will know that no subsequent drives will be as pleasurable.

Now, at 25, the drives I enjoy most are the ones I take with my partner. To date we’ve done Durban, Mpumalanga, the North West, and a few shorter ones throughout Gauteng. She always handles the music and directions and I simply drive. We tend to spend the first hour or so talking excitedly about how good it will be to leave the smoggy city for a few restorative days. The rest of the trip is usually spent in silence, each of us taking in the scenery passing by and letting our minds wander out to nowhere specific.

As it goes, not all long drives are for pleasant reasons. A few years back, on the road to attend the funeral of a cousin who died behind the wheel of a car, my mother, my sister and I drove 16 hours from Cape Town to Durban, racing through the dark in order to get there as soon as possible.

We had heard the news the day before and hadn’t really found time to process the loss. Throughout the trip we talked and listened to music and stopped off at odd little roadside cafés and even laughed a little. We mourned too – each of us in our own way, reached a point of acceptance somewhere on the road – so that when we arrived at the funeral, we were ready.

My mother said I used to be an anxious child and that this is probably what makes me an anxious driver. I don’t see her much these days which is probably what keeps her from realising that the anxiety never left once I became an adult. It probably never will and I’ve learned to come to terms with this.

There are times, though, when it comes through in great, unavoidable waves that shorten the breath and clutter up the mind. I’ve never been a very confident driver, but I do enjoy long drives. They have a way of forcing everything else out.
Read 3002 times
Published in WRITING
Tagged under

Dave Mann is a writer and editor. He is also the co-founder and publisher of Ja. magazine, a digital publication of new visual and written work from SA and abroad.