How We Ended Up Here 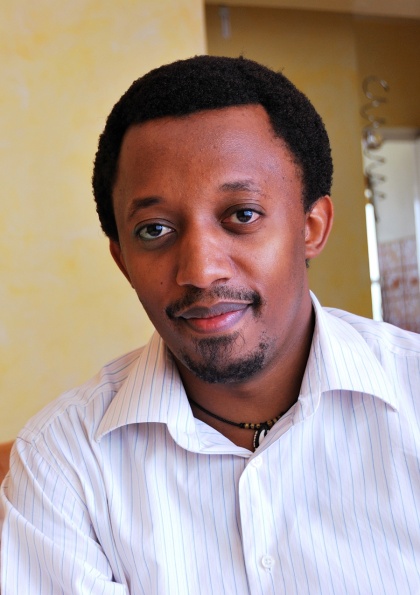 Kenya based writer Karest Lewela talks to Karen Martin about redefining what is African by listening to the past and mapping out the future.

"I hope to inspire a reflection on how we ended up 'here', and whether being here is the right place to be if we are to achieve our best potential ... "


Karen Martin: What do you mean by "African Renaissance"? What will be recovered from the past, and how will it respond to and shape the future? How does your work as a poet and storyteller contribute to the renaissance you imagine?

Karest Lewela: African Renaissance is a conscious movement and thereby a lifestyle that seeks a realistic yet idealistic rebirth of Africa. This journey necessitates the review of creative new knowledge: to clarify the grey areas, to redress the errors, to understand our heritage and the events that put us where we are. It is an active attempt to define who we are and influence our future, and eventually to map out the way forward. All this is a bid to redefine ourselves as Africans, an enabler for the achievement of our best potential.

The past offers a holistic plane that shudders with an echo, whose greatest benefit to the movement is the clear definition of African identity. I believe that as Africans we are characterised by a paradox that denies us a definition of ourselves, denies us self-knowledge. Some clarity lies in the past, in understanding our interactions, some of which were ideologically brutal, such as the European Disruption, slavery and colonisation, all the way to nationalism and neo-colonialism.

African Renaissance is thus a rebirth of a clear identity. This in turn is rooted in a self-aware culture born out of an integrated approach to scholarship. At Maktaba Afrika, we have developed a conceptual approach to studying Africa, which we call African Renascent Integrationism (ARI). ARI seeks to reaffirm African cultural worth today by identifying the presence of cultural aspects that exist in both 'purist' and renascent Africa. It links today's African urban culture to purist Africa, establishing the three primary integrated aspects of literature, music and philosophy as one, unified, basic discipline that permeates every aspect of African culture.

My work as a poet and storyteller seeks to explore this integration of literature, music and philosophy. Some of the recurrent themes in my writing include: self-identity, challenging economic models, questioning the validity of African History as depicted by the Other voice, social justice, and re-thinking religion and globalisation in contemporary society. I hope to inspire a reflection on how we ended up 'here', and whether being here is the right place to be if we are to achieve our best potential away from the great calamities of poverty, ignorance and disease.

I am full of faith that through my work I can contribute to and on behalf of Africa as a point of reference to global thought.


KM: What do an open mic session in Nairobi and publishing on the internet do differently for you as an artist with an agenda? How might these two streams of sharing your work contribute differently to an African Renaissance?

KL: The open mic sessions give me a platform to express my thoughts to a field of potentially like-minded individuals and groups. They also provide an opportunity to begin conversations on common issues and to make a linkage for a viral dissemination of African Renascent Integrationism. Outside formal institutions such as schools, we have a challenge with our reading culture in general, so performance poetry bridges that gap.

The artist's life is overall a very lonely one, and rich in heightened sensitivities to the injustices that plague our very existence as a people. I find the open mic sessions a great platform for solace and reassurance (that there are many soldiers in this battle for the best of our potential), and a great source of inspiration listening to different voices.

Publishing on the internet increases the scope of the audience, as opposed to print. Accessibility to the world opens avenues to discuss common issues, hear alternative voices (challenges) to my belief systems, and refine myself as an individual and as a writer. The internet gives great room for almost instant feedback, which may not be so forthcoming with print media.


KM: Who do you want to speak to with your work, and why? Do you see yourself as having a range of audiences? Who are they? Where are they?

KL: I speak to those individuals who feel an itch to redefine themselves, and are therefore constantly barraged by questions of self-identity and nagged by their conscience to make a contribution to humanisation. I also speak to individuals who, due to economic pressure, are typecast into roles that deny them the voice and courage to be themselves and thereby their best selves.


KM: Where do you come from and how did you end up where you are? Has your life path been predictable or has it taken some unexpected turns? Where would you like to find yourself in ten years' time?

KL: I come from Africa, and currently Kenya is the vessel that houses my person. I became an African before I became Kenyan, thanks to a stint of study in South Africa. I was born and raised in California (in Nairobi), a vibrant and socially charged environment, characterised by an almost violent struggle for economic emancipation, and made livable by great determination, proud and youthful independence, and an ebullient sense of humour. I owe the room to chase my potential to my mum, who single-handedly instilled a sense of diligence and discovery in me, providing the first socially deconstructed environment that enabled me to strive to excel.

I understood early that education would be my only key to independence and I have been fortunate to study at some of the greatest institutions: Starehe Boys Centre, St. Stithians College and Kenyatta University. Through this journey in education, I have met people who moved me from my comfort zone into chasing individual breakthroughs, who have made me realise that serenity doesn't exist in isolation, and who act as my pillars of reinforcement in the values and ethics that define me as a person today.

Life hasn't been predictable, and I don't think it will be in the coming future. For instance, I never thought I would end up working in the oil industry! In ten years time, I pray that I will be out of corporate life (where I have been the last six years) and back in development work, especially education. I hope that by then I will be an authoritative voice in the elements of culture: literature, music and philosophy. I would like to do an in-residence writing program (perhaps an MA / MFA in Creative Writing) and target to complete a novel whilst at it. I am working to one day publish an anthology that combines my short stories and poems.


KM: You say you are no stranger to controversy. What kind of controversy? Can you tell us a story about one such controversy you have been in?

KL: My writing seeks to upset the status quo. I read a lot, and I must admit that I am almost instinctively attracted to titles that refuse to agree with conventional wisdom. Some of my favourite texts include: Paulo Freire's Pedagogy of the Oppressed, Charles Marlowe's Dr Faustus, Frantz Fanon's The Wretched of the Earth, Mohsin Hamid's The Reluctant Fundamentalist, and Herman Hesse's Siddharta. If you look at my first story to be published by ITCH, Yohanna's Factory, you will find a criticism of capitalism, for instance:

"I love capitalism; one can easily sell folly to any ignoramus for a profit. The way the system is designed is very much like a wager. Business deals allow us to accept our uncivilised (sic) selves as the starving people who would rather trip on each other and be called greedy than share out the little that is available..."

KM: ITCH describes itself as "South African rooted and internationally relevant". What does this mean to you in the context of the internet and other globalising forces? How do you see South Africa in relation to the rest of Africa?

KL: Being internet based, ITCH is able to reach more widely than South Africa for both its audience and its contributors. Divergent voices, in both the writing and the feedback given by readers, ensure that the voice that ITCH represents can easily be a global voice. For me this is exciting, because relevant messages should not be limited to a particular class of people (and I use the word class in the most generic interpretation), but should reach all humanity.

The world has a soft spot for South Africa, partly because of the atrocities that came with apartheid and partly because apartheid brought together forces of humanity across the globe, and in the end, humanity triumphed. There's lot on good governance that Africa can borrow from South Africa, and the self-pride of its people needs to shine and infect the rest of Africa. South Africa mirrors the development challenge faced by most countries, where socio-economic development worsens the rift between the rich and the poor, a situation that is unhealthy for any nation. Africa must begin to think of itself as one people, and South Africa is in a pivotal position to champion such unification attempts.

KM: How do you like the current issue of ITCH? Do you find resonances with the other artists and their work? Is there anything in particular you would like to see in future issues?

KL: I love ITCH as a platform for my work, because the themes are artistically provocative without serving the function of a straitjacket. The quality of contributions in this issue is stellar (though I must admit this is not limited to this issue) and there is so much to learn from other writers.

The theme for the current issue reflects on identity, something that occupies a huge part of my Self (and perhaps any other living human being). I love the different takes that different writers have on the same, and these voices could easily spur a new story. How about that for symbiosis?

In future issues, it would be great to find more voices from across Africa.

Here are links to some of my other poems and narratives: Familiarity in ITCH e.06; 1926 Miles of Training, Drop and Trusting Foolishly in Pambazuka News; Strained Choices at Storymoja.
Tweet
Published in NEWS