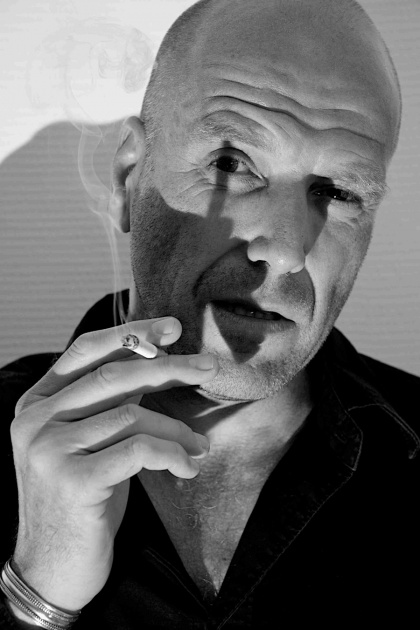 "The broader relevance of my work lies in using South Africa as a metaphor for exploring the complexities and contradictions of a changing world."


Karen Martin: ITCH describes itself as "South African rooted and internationally relevant". What does this mean to you in the context of the internet and other globalising forces? Where are you rooted? And where are you relevant?

Richard de Nooy: Although I have lived in Amsterdam for almost 25 years, I will always remain firmly attached to South Africa. I recently described the nature of this bond in a poem called Frayed Sutures, which begins as follows: "I have sliced and chewed but I cannot detach // Myself from the cord that binds // Me to our ruptured womb // The bleeding placenta // That fed us all."

When I first arrived in Holland in 1986, I was ashamed of my South African roots and focused mainly on assuming a Dutch identity, working hard to eradicate my English accent, so that I was not constantly faced with questions about my past. But since the country's liberation, I have developed a growing sense of pride in South Africa's achievements, its ability to change. And since the publication of my first novel in 2007, I have gradually been drawn back into the fold, connecting with South African authors and readers. The latter process would have been well nigh impossible without the internet, which offers me a platform for interaction, primarily via BookSA and GoodReads, and more recently via Facebook. My growing "relevance" in South Africa subsequently gave rise to attention in the Netherlands and, to a lesser extent, the United States.

I now believe the broader relevance of my work lies in using South Africa almost as a metaphor for exploring the complexities and contradictions of a changing world. In the Netherlands, for instance, people tend to forget that rights and freedoms are not a matter of course, that they must be actively defended and upheld, that people have given their lives and suffered immense hardship to achieve this freedom. The internet helps remind people that this process of liberation is still underway on many continents.

KM: Why did you choose to publish in ITCH? Would you like to be published in the journals you wrote pre-emptive rejection letters to?

RdN: I would like my work to be as broadly read as possible. Yes, I would like to be published in those journals, but only because I know they would lend further relevance to what I write. They offer authors a stamp of approval, a passepartout to a literary elite. The main drawback is that they offer little access to the broader world, because they have a rather select readership. ITCH is a selective but open platform that offers a similar stamp of approval, but gives unrestricted access to readers worldwide. This coincides more closely with my own ambitions. If truth be told, I can't be bothered to meet the submission requirements of those journals and I am too impatient to await their response. Perhaps someday they will decide to approach me. Hence the pre-emptive letters of rejection.

KM: How do you like the current issue of ITCH? Do you find resonances with the other artists and their work?

RdN: I am impressed by the quality and variety of the contributions, although I must admit I haven't had time to read them all. My resonance with other artists and their work is much like an orchestra in which we each play our own instrument: sometimes the melodies and rhythms converge and work together and sometimes they are dissonant, but ultimately the goal is to make music expressing that which might otherwise lie dormant.

KM: In an interview on Litnet, you say that you used to experience visiting South Africa as coming back to the same room each time, but that now it's more like going through a portal into a new and fascinating world. What is new? What is fascinating? And why has the change happened for you?

RdN: Through my writing, I have had the privilege of meeting many authors from many different backgrounds, who are not only incredibly dedicated to their work, but also actively participate in shaping change, helping others and bringing about improvements through constructive criticism and participation in broader dialogue. I find the latter dimension both fascinating and heart-warming, and I consider it an honour to be counted among their ranks. My first book was the key that opened the door to this world. My own curiosity and desire to engage and explore did the rest.

KM: Do you identify as South African? African? Does your cultural identity shift depending on where you are? Are you African in Amsterdam and Dutch in Johannesburg? Or don't those categories make sense to you? Are they irrelevant in the world you occupy and move around in? What is constant about yourself and what shifts as you move between cultures and continents?

RdN: In my case, the greatest disparity lies in the spoken language. It is almost as if I have two different identities when I speak English and Dutch. When I speak the former (my first language) I feel calm and confident, as if I am in full control of the conversation, as if I have nothing to prove. But when I speak Dutch, I still feel - after almost 25 years - that I am inferior to the locals, as if I am trying too hard to prove something, as if I am incapable of expressing my identity to the full extent. This disparity is less marked when I write, because I am granted the time to seek words that fully express my opinion.

Because I have never considered myself Dutch or South African, I am able to view both of these cultures as an outsider, with a sense of amazement and delight. This more than compensates for the vague sense of longing for a spirit of place that goes with being fully absorbed into one culture or the other. The World Cup really brought this home to me. I've watched all the Dutch team's matches together with a group of neighbours. I support Orange and want them to do well, but unlike my neighbours, I never get dressed up in orange to get the full patriotic experience, and I accept their barbed comments about my black t-shirt and apparent lack of enthusiasm.

KM: What was your experience of writing your new novel in Dutch compared to writing the first in English? Did the different languages provide different consciousnesses? Do you occupy a different self in each of those languages? In this regard, what was it like translating your own work in your new novel? Do you prefer one or the other version?

RdN: I received a grant from the Dutch Foundation for Literature to write my second novel in Dutch. This erased some of my doubts as to my proficiency in my second language. I had no trouble writing in Dutch, but whenever I reached the end of a working day and made notes at the end of an unfinished chapter, I would do so in English, as if the language itself wanted to assert its dominance.

I am currently working on the English edition of the novel, which will be more than a mere translation, because I am rewriting all the dialogue and adding whatever new dimensions I discover as I work. In the Dutch edition, I have Afrikaans characters speaking Afrikaans to Dutch characters, which causes all sorts of confusion. And in the English edition, all of the characters speak their own brand of (poor) English, which leads to all sorts of misunderstandings. I'm also writing the English with non-Dutch readers in mind, which means I explain or elaborate on certain circumstances that may be self-evident to Dutch readers. Consequently, I anticipate that the English will serve as the source text if the book is ever translated into any other languages.

Do I occupy a different self when writing in Dutch and English? It is my aim to fully inhabit my characters, regardless of whether I write in Dutch or English. That is my supreme objective - to give my characters their own voices, either in Dutch or English, so that readers may draw their own conclusions about the characters' actions, thoughts and words. I recently wrote: "And so I am the torturer, his wife, his daughter, his dog, their god, the man who washes him for the grave - all and none."
Tweet
Published in NEWS