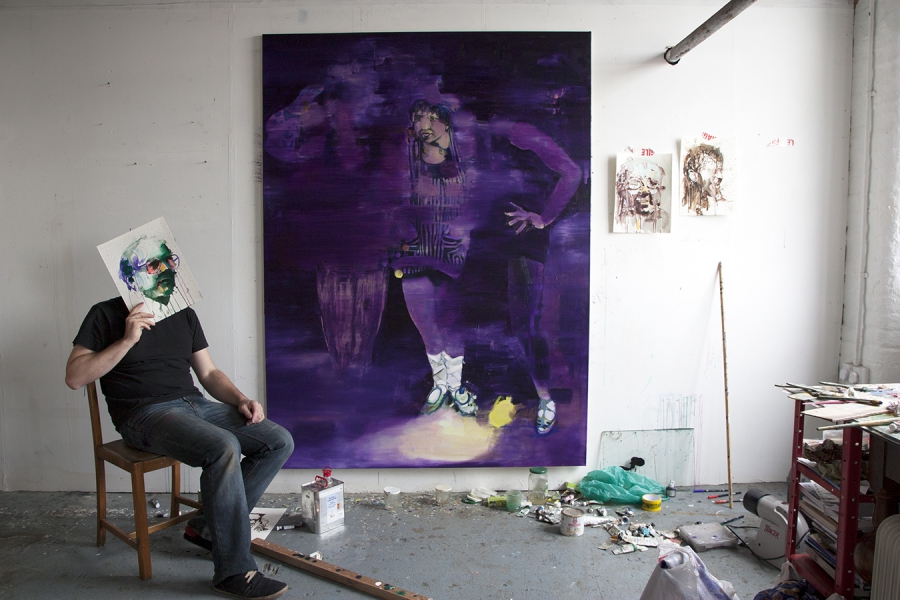 View the embedded image gallery online at:
https://itch.co.za/archive/issue-17/item/1541-encountering-bartosz-beda-its-personal?tmpl=component&print=1#sigProId3d0e1135f1
I never noticed it from here before.
I must be wonted to it—that's the reason.
The little graveyard where my people are!
- Robert Frost


Through a metal gate and across the lush lawn behind the main house, I headed toward the small frame structure in the southwest corner of the property. He was sitting on the stoop of his rented studio next to an already thriving vegetable garden.  He stood to greet me with a wide smile.  The unusual early heat had turned late May into summer, but the studio was still retaining the cool morning shade when we entered.

From my first encounter with a Bartosz Beda painting, I wanted to see more. Initially captured by the intense, maybe even intimidating energy of the work, still I was unprepared for my experience at his studio that morning, a disturbing and provocative one.

Carefully stepping over and around small, seemingly random images, including an upside down face of what appeared to be Marilyn Monroe also underfoot, I made my way toward the huge painting on the wall across the room--the underlying image(s) of it over-painted, scraped and even scratched, various colored spheres scattered randomly around the canvas  (those spheres or similar sphere-like blotches being a motif that dances the eye across the mystery of many of Beda's painting) as if teasing the viewer not to "touch down" but ironically demanding it at the same time.  I had to turn away.

Bartosz had entitled the painting, " Looking at things and feeling good about them."   Because I could not "feel good" about or even identify whatever "things" he meant, I decided the title referred not to the existent painting itself, but rather the artist's process and culminating satisfaction with the fact that, as he explained, only 10% of the original image remained.  Some of the titles of other paintings seemed more straightforward.  For instance, another large painting, this one with a faceless bicyclist, painted in radiant blues, greens, with a yellow background.  The title:  "Yellow."

Provocative.  Disturbing.  Intriguing. Every painting in the room.  But none of his work compelled me more that morning than the collection in the folio of ink drawings which he placed on the floor and turned page after page.  Lines and diaphanous smears, color running or strangely contained to blur or define each portrait, all eight faces revealing only one "functional" eye, the other either totally hidden by the hands or blackened as if gouged or disfigured or framed by the subject's thumb and forefinger as if to focus the lens before taking a photograph.  Of whom? The viewer?  To see or not to see seems to be a thematic thread, every one of the portraits evoking its own narrative.

One woman in the series has the hazy image of a child emerging from the top of her head.  The person in the next portrait forms a pyramid with his hands around an eye suspiciously similar to the All-Seeing Eye, the eye of Providence which still appears on the US dollar bill, a symbol that was added to the Great Seal of the United States and adopted by Congress in 1782,  but also the eye of the Illuminati who saw themselves as gods.

Each successive image disturbed me more. The haunted and haunting eyes. The obvious physicality of the process in even these ink drawings, and the undertow of a mysteriously graceful violence made my encounter with them personal.  The title of the collection: Illuminati - An American Dream. The eighth and last image--a native American.

Philosophical, psychological or political?   Every time I reconsider any of the individual images, I find myself re-perceiving the collection as a whole.  I'm conscious of my own limitations of seeing and how this art not only absorbs that consciousness, but insists on my absorbing it back.  I can't help asking if Beda's art is making an intimate or a public statement calling for an internal or judgmental examination.  Has he assumed authority over his subject, and/or over the viewer, or is he too, experiencing the anguish, struggling with his own urgent narrative as he "destroys" in order to create?

Gatsby--who believed in the orgiastic future, who did not realize that the dream was already behind him. Fitzgerald wrote:  ". . . for a transitory enchanted moment man must have held his breath in the presence of this continent, compelled into an aesthetic contemplation he neither understood nor desired, face to face for the last time in history with something commensurate to his capacity for wonder."  The present no longer makes sense, the past refuses to comfort.

As with all art, how we receive it has more than enough dependency not only on who we are, but where we are, and how we see.  And how I see this work unbalances me. The title focuses my eye on a culture and within that culture, my own participation. "I never noticed it from here before," wrote Frost a century ago.

Good art is seldom comfortable. In Beda's work, old demons confront new ones. Does his perception in the Illuminati portraits obfuscate or clarify?  Are they conventional or perceptive, judgmental or tragic?   Whatever one might decide, this collection serves as, to quote Kafka, "an axe for the frozen sea within us." It reveals a culture disappearing under or emerging from a process of psychological smears and paintouts as Beda negotiates the images and the dream. He requires something of us--an exchange of energy. How could anyone expect more from an artist or his art?  The narrative is in the process as well as the finished work.