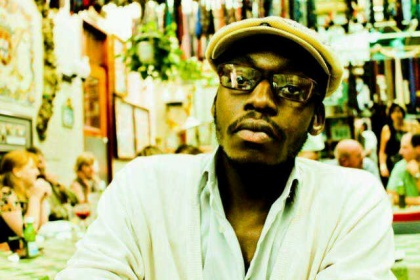 When I meet up with Itani Thalefi, who prefers to go by the pseudonym Grae Matta (or simply Grae), the air is filled with the sound of music as he sits strumming away at his acoustic guitar. He's wrapping up a practice session with some of his fellow artists. It's been quite the mission to get myself squeezed into his already full schedule, which has been progressively filling up as the year unravels. "I have a meeting with an artist management company later," he informs me; time is tight for this busy man. But here on this sunny Thursday morning he'd made the time and I was able to exchange a couple of words with this artist about his journey thus far.

"I sent my parents an email telling them that I was going to be an artist," he tells me. "I wanted to take a year off to focus on that." After graduating from university he asked himself, what next? He had his degree but not a cent to his name. As chance would have it, along came a poetry slam competition: TEWOP (The Elite Wing of Poets). He began performing, attending workshops and rehearsing: moulding his craft. He was in his element and it wasn't long before he was being approached to perform in other artists' plays and short films, and invited to plays himself.

"Everything around me," Grae responds, when I ask what inspires him. "I try my best to remain aware of self and the spaces I occupy as a person. The stories being told around me, from conversations with friends, to literature or a movie even a concept from a text book."

Grae began writing at the age of twelve. Too shy to talk to girls, poetry became a means of getting his feelings out. Being creative has always been a part of his life, he tells me - so much so that he had to repeat his second year of university because he'd been too busy in recording studios. "Back then poetry was just a hobby," he says calmly. He never once thought that his performances and poetic work could become a source of income.

He does not have a particular preference towards the kind of work he produces, stating that he wishes to be a "jack of all trades, yet master of none". This leads me press him: how would he describes himself as an artist? "Very eclectic, very worldly, 'cause it's all interconnected. I want to push myself beyond my actual capacity and experiment with different genres of music from jazz to indigenous African music."

Grae is also a singer - having participated in choirs from grade four through to his matric year. At varsity he taught himself to play the guitar and he is currently learning the bass guitar.

I ask him whether the description of ITCH as "South African rooted and internationally relevant" resonates with him. Grae responds, "I believe that our stories, which are considered 'South African' or derived from a South African context are in fact universal. Everyone experiences fear, love, sadness and joy - although perhaps the languages and ways in which we articulate them are different."

Having majored Psychology and Sociology his work is concerned with personal and universal struggles, exploring concepts such as God, rape and child soldiers. "We live in South Africa, but we know very little about the rest of the continent and seem to know more about European and American trends neglecting our own stuff"

So I wonder, does Grae feel that South Africa supports the arts adequately? He responds with cautious optimism, "To some degree both yes and no. The ability to access to the platforms and spaces for young people to learn art (whatever medium) is sparse. Nor are arts given any special attention in schools, particularly in the townships. However - that is not to say that greater improvements in both areas aren't being made by lone individuals, companies and arts collectives."

He talks about his poetry and two pieces that come to his mind on this topic. One is a critique of the 11 official languages; the other entitled Animal Farm suggests implies that political leaders are just that. Grae wants to challenge people through his work, and to invite them to think differently about themselves and the world around them.

I ask him how he measures his success? Does he need feedback from his audiences? He muses, "Measure success? Hmmm..." but then claims that as long as he achieves his artistic goals of getting himself out there, creating socially relevant work, and growing and developing as an artist using different mediums, and succeeds in staying true to his talents and who he is, he feels that he has attained some level of success.

Grae has a lot planned for the year ahead: releasing an EP and working on a short film based on his poetry. When he's not writing poetry or rehearsing with his band, he puts time into the work in progress on two plays. He also aims to finish a book titled I Cried a Puddle of Answers, which is about his experience of depression and working through it.

"You always have a choice," he tells me. "Greatness is a Choice, just as laziness is a choice. You create your destiny, you create you life". Although he still feels awestruck and overwhelmed at how much he has achieved in just four months, Grae keeps it all together and tries to remain humble by surrounding himself with inspirational people and getting the support he needs from friends and family

We're running out of time, so to wrap things up, I ask, "If you had to describe yourself in three words or a phrase what would it be?"

He takes his time considering this. I can see him playing around with words in his head. What he comes out with is appropriate, I think: The Curious Nomad.


Itani Thalefi is a poet, who goes by the name of Grae. He is best known for his involvement in the TEWOP Slam Poetry Competition where he gained recognition for his work. He completed his BA at Wits in 2011 majoring in Psychology and Sociology. He has recently had his work published in the April issue of I Speak Hip Hop Magazine. Besides being a poet and playwright, he has recently made an attempt at acting and is the lead vocalist and guitarist of a three-piece band named No Idea. ITCH intern, Woodman Maphalala meets up with Grae and probes for information about his creative process and background.
Read 4068 times
Published in NON-FICTION
Tagged under
back to top
© 2021 ITCH. All rights reserved. Contributions copyright of their respective owners  |  Privacy policy  |  Terms of use