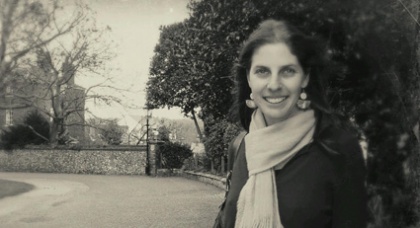 In the first of her four-part series of interviews with young South African poets, Genna Gardini speaks to Jenna Mervis about publishing her first collection and reading poems aloud in pilates class.

"Women in South Africa are really finding their voice now," says Jenna Mervis, the Cape Town-based poet who released her debut collection, Woman Unfolding, in November 2011. "Our female writers are incredible and inspiring. And boy do we have subject matter in this country. There are so many stories to tell."

Telling some of these stories is a task that's kept Mervis busy for quite a while. Since reading her MA in Creative Writing at UCT, the writer has seen her short stories published in the 2007 POWA anthology, shortlisted for the prestigious Pen Studzinski award in 2009, and included in the latest Green Dragon anthology. Mervis is particularly known in the local literary scene, however, for her work as a poet, which began while she was still in school: "When I was 15, I was chosen to read my poetry at the Poetry Africa Festival in Durban," she recalls. "It was inspiring, terrifying, fun."

After many years of having poems featured in South African journals, Mervis launched her first collection, Woman Unfolding, published by Modjaji Books, in late 2011. "A friend asked me the other day if I'd researched the etymology of the word 'unfolding'," says Mervis while discussing the book's title. "In a way my collection is an embodiment of this idea of unfolding. It's a disclosure, to a certain degree, an evolution of girl into woman, daughter into wife, naïve child into independent thinker. There are veins of other themes in there: questions of belonging, of movement, of loss. Most of the poems also contain a taut balance between optimism and pessimism. It's a Libran thing, I'm afraid, all this balancing."

That balancing act seems to have taken some time to perfect. When asked how long the collection took to put together, Mervis laughs. "The short answer: 5 years. The long answer is that the ghosts of poems past lurk within its pages. Some I wrote whilst reading for my Masters five years ago. The most recent poem was added during the editing process." Modjaji Books, which has become a stalwart of women's publishing in Southern Africa since its birth in 2007, seemed like the right place to approach: "Colleen (Higgs, Modjaji's owner and publisher) embraced my collection. I posted it to her and she sent me this wonderful acceptance email. All I could think was she gets it!"

The gap between having a manuscript accepted and holding the finished book in your hands, however, can be a lengthy one. "From my experience the publishing process has many stages, a bit like the 5 stages of grief I suppose only not as morbid!" says Mervis. Those stages, according to the poet, "are

The implied thirteenth stage, in which the book is released into the general public, seems to have gone well. "I find a lot of mothers are buying Woman Unfolding as a gift for their daughters," says Mervis. "I love that idea." When asked about her own mother's reaction to the collection, she admits, "I'm a terrible self-promoter and useless marketer, for some reason. But my mom is brilliant, really brilliant. She marches into bookshops, talks to owners, promotes me. She's amazing. I'm a bit of an introvert."

While she may not always be a fan of actively punting her work, Mervis is not opposed to the occasional impromptu reading: "I read my posture poem to my pilates class. We sat cross-legged on our mats at the end of class and listened to a poem. That's something isn't it? What on earth is poetry doing in a pilates class? But that's the thing - poetry should be everywhere. It is everywhere, only people don't have time or the creative space to realise it. In that sense, everyone who reads my poems realises that there's a poem in everything, from making a shopping list to a physio appointment."

When asked if she has any pressing plans to turn her latest shopping lists and physio appointments into a second collection, Mervis replies, "Yes. Of course. I've been told to call it Woman Folded and Packed Away." She pauses and then adds, "Do I need to say that I'm kidding?"

Jenna Mervis is a poet and freelance writer living in Cape Town. Her work has been featured in several South African journals including Carapace, Green Dragon, New Contrast, New Coin and the 2009 PEN Studzinski Literary Award anthology New Writing From Africa. Born and schooled in Durban, Jenna studied Journalism at Rhodes University and obtained an MA in Creative Writing from the University of Cape Town. Her first collection of poems, Woman Unfolding, was published by Modjaji Books in 2011.
Read 4058 times
Published in NON-FICTION
Tagged under
back to top
© 2021 ITCH. All rights reserved. Contributions copyright of their respective owners  |  Privacy policy  |  Terms of use