The Myth of Taboos and Impotent 'Counterculture': A Cynic's Rant 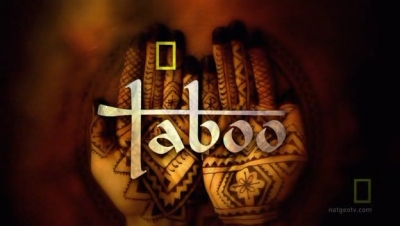 Image courtesy of the National Geographic Channel. The author claims no intellectual ownership or creative license thereof.
The National Geographic Channel routinely airs a program simply titled Taboo which, needless to say, deals with subject matter that typically elicits an ‘ooh’ and an ‘aah’, accompanied invariably by a disapproving shake of the head or facial expression that marries bewilderment with fascination. The idea of flying completely against normative behaviour, values and notions brings with it a kind of intellectual excitement that is not dissimilar to the adrenalin rush when one decides to do something that the brain deems detrimental and/or lethal.

(The effect of adrenalin fades.)


Extensive tattoos that transform a man into a leopard. Sadomasochistic nude couples that pierce each other with all manner of steel objects for an on-looking crowd. Pre-pubescent girls given carte-blanche to have sex with whomever they want in their parents’ back yard (quite literally). Rites of passage that are the stuff of nightmares for males around the world. Diets that most would expect to see only on Fear Factor.

These are all the things you would see on Taboo. They are deviant from convention. Rules are ignored and broken (and, if you’re a masochist, handcuffed and whipped). These are the people, in other words, who use grammatically incomplete sentences, use full stops instead of commas and semi-colons to punctuate them, and begin a paragraph with a hanging sentence that senselessly defies the cardinal left-hand margin.

The idea of ‘taboos’ is mythical on two fronts: First, they do not have any intrinsic meaning. Secondly, and subsequent to the absence of meaning in the first place, taboos can only (inadvertently attempt to?) construct meaning by using convention as a point of reference. Allow me to illustrate.

Convention as a point of reference

… so, really, he is only considered taboo because his chosen mode of expression does not fall in line with expectations of conventional expression. A frustrated young man, for instance, usually gets a Mohawk and plays drums exceedingly loudly. Or he gets a semi-legible tattoo on his right shoulder and lifts weights. Or perpetually wears headphones while ascribing to himself a nickname that everyone around him is supposed to know via osmosis.

We read texts by calling them ‘taboo’; we do not, I don’t think, read them as taboo. This is precisely because, outside of the normative, ‘taboo’ has no meaning. Without labouring the point, to fly against something presupposes, and by extension reinforces, that there is a something to fly against to begin with.

In this sense, taboos are unoriginal.

It is the proliferation of ‘taboos’, then, that has given birth to the concurrent fallacy of ‘counterculture’. In various contexts, the idea of defying the accepted norms is often employed by youth as we revel in an extended project of self-discovery and identity formation. Of course, some find it easier to simply categorise this as ‘rebellion’.

Yet I beg to differ, for further thought on the matter surely must reveal that rebellion for the sake of rebellion is nonsensical, and in fact impossible, much in the same way that abstaining from voting is in itself a political choice. Sibusiso does not launch into alcohol at 16 after having been a ‘well-rounded’ young man ‘for no reason at all’. Curiosity is a reason. Undetected depression is a reason. Boredom is a reason. Lack of or disregard for moral principles is a reason. Long-standing anger at dad’s absence is a reason. Upholding a certain image is a reason. Inability to deal with his high school crush’s infidelity is a reason. The point is that, however trite or serious, however sudden or gradual, however impulsive or well thought out, however conspicuous or hidden (even to himself) the reason is, there is always a reason.

I highlight the logic of rebellion only because ‘counterculture’ is seen as a rebellion against certain cultural norms. Thus it is evident that ‘Counter-culture’, insofar as it seeks to go against what ‘everyone else’ is doing, is nothing more than rebellion, and it should be called as such.

What’s the big deal, one may ask? Well, the term ‘counterculture’ gives the false impression that there is some kind of original and authentic identity to be found or formed within it, when in fact, if you accept my line of thinking, ‘counter-culture’ is itself a way of exploring alternate identities other than those prescribed and imposed. It cannot be, to be sure, an alternate identity (nor a constellation thereof) in and of itself.

Ultimately, then, all we really have in ‘counterculture’ is the proliferation of taboos , so that there is what I call the culturization of ‘counterculture’; we have so many attempts at going against the flow that they simply create another flow, exceptional only by virtue of going in the opposite direction. Note that it is a flow nonetheless. In short, breaking the rules becomes a new rule.

It is thus that the term taboo has a seen a metamorphosis from being the name of shocking but relatively isolated rule deviations to being simply another name for another programme that shows a series of these rule deviations through a very conventional medium: TV.

Zama is a writer and holds an MA in Ideology and Discourse Analysis from the University of Essex.